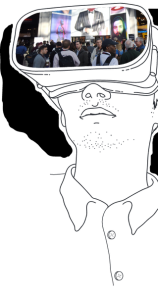 This weekend I attended the inaugural NYVR Expo at the Javits Center in New York. This was the first year of this first large-scale VR/AR expo and conference, which looked at VR and AR applications across a wide range of industries. PennImmersive has been investigating the way these technologies have the ability to transform our lives, with a focus on teaching, learning, & research; and opportunities like this one where you can meet, interact, learn from, and network with such a broad range of VR users and developers are still pretty rare, so for me to attend was a no-brainer.

The VR expo occurred at the same place and time as the Photo Plus Expo, the largest conference and expo for photography and videography in North America, and admission to NYVR permitted access to the Photo Plus show floor as well, which gave me a lot more to explore and find some promising additions for the equipment lending program in the Vitale Digital Media Lab. I’ve been to Photo Plus before, and it’s a lot of fun for any photography enthusiast.
The NYVR expo ran from October 26-28, but I only made it up for the final day on Saturday, but I missed some good seminars by not coming earlier in the week. The 2 most valuable and interesting sessions I attended were “VR Filmmaking’s Future” and “Art in VR”, and I’ll do I’ll do separate blog posts on those. (I ended up skipping “VR and the Future of Car Buying.”)

Some of the interesting-sounding seminars I missed by not coming earlier in the week included:

The showroom floor featured over 40 tables and booths. In addition to some of the larger and more established companies working in VR and AR with booths on the showroom floor, there was also the “NYC Media Lab Incubator Zone,” focusing on new startups and technologies in VR and AR. Over all there was too much for me to mention every single VR/AR business/service/vendor/technology with a presence at the expo, but here are some of the highlights at the NYVR Vendor floor/showroom:

Mocha VR–a stand-alone product as well as a plugin for Adobe Premiere, AfterEffects, and Avid–allows masking, object removal (including nadir patching), motion tracking, and stabilization optimized for a 360 degree workflow. If you’ve worked on a 360/VR film, you know how difficult but critical these tasks can be. You can expect us to be getting this software in the media lab soon. Check out this video that explains it better. For me, finding out about Mocha VR may have made the entire trip worth it all by itself.

Ricoh, Samsung, Polaroid, and Vuze were there demoing their 360 cameras. (We actually have the Ricoh Theta V 4K camera in the Vitale Digital Media Lab if you’d like to borrow one to try out.) One thing I noticed is that nobody is selling HD 360 cameras anymore. 4K is now the baseline everyone is starting from, which is good because HD cameras just don’t provide a filmmaker with high enough resolution to make an effective video. There are a growing number of cameras offering 8K, although even “low-end” 8K 360 camera (such as the Insta360 Pro that we have here in the library) are still in the $3000+ range. I was sorry that GoPro wasn’t there as well, since they have a new 5.2K VR camera called the Fusion coming out in a couple months that will be much cheaper and much more user-friendly than the existing GoPro Omni.

Hieroglyph’s software, Drawn-2, lets you draw 2D objects directly in a 360/VR space, using the skills you already know in Photoshop, handling the perspective for you. The demo of this was pretty impressive if you’ve ever tried to draw directly in a spherical or equirectangular image before.

VRPark Products bill themselves as “The most compact amusement park”. They were showing off their VR Rides, which allow you wear a VR headset while sitting in a motion simulator pod that can tilt and shake and blow air on you, making the experience much more life-like. The line to try the rides was the second longest line there.

I tried one of these out at a mall on the Las Vegas strip last week when I was there for Adobe MAX, and it was quite an experience–maybe a little too real for me. The motion and air add a huge amount of reality to the VR experience. For example, if you’re on a VR roller coaster, the pod shakes and moves and tilts in sync with the VR video exactly as a real roller coaster would, and it blows air on you just as you would feel in real life. A horror-themed ride I tried out used blown air to simulate blood and gore splashing onto you, again very life like in conjunction with the video. I would say you owe yourself to try one of these out if you have the opportunity. VRPark generally makes their experiences available in shopping malls, but they told me you can rent them for events as well.

The longest line was for the Microsoft booth, to try out the new Acer Mixed Reality Headsets. They are fairly affordable at about $400 with the hand-controllers. (Keep in mind you can get an Oculus Rift with hand controllers for about $450, but both Oculus and Acer require a suitably powerful Windows PC and graphics card) The line was too long for me to wait in, but the people trying them out seemed quite impressed. We’ll be getting one of these soon for PennImmersive, so you’ll be able to try before you buy if you’re interested.

Ovation VR Public Speaking Trainer puts you into a range of life-like speaking situations (classroom, courtroom, opera house, conference room, etc.) where you can practice your presentation, play back your speech and watch yourself from the audience’s position, and view analytics gathered by Ovation (Speaking rate, eye tracking, filler words, hand movement, etc.), and even share a recording with a colleague to get feedback.

WaVR is a brain-controlled VR technology that uses biosensors to monitor changes in alpha waves, which can be used to trigger commands on the VR application. It also engages your other senses (except for taste—he said taste was a difficult one) through a vibrating chair, fan blowing a breeze, and wafts of perfume.

Symmetry is a VR software tool (available on the Steam store) for professionals in architecture, engineering, and construction. It allows you to import your CAD and SketchUp designs into VR and share them with clients collaborate with colleagues in real-time within the same virtual space, adding or removing markup that is visible to other users, with full audio capabilities.

Membit allows you to take a photograph and leave it in the space it was taken to be seen by the next person who comes along, essentially sharing the past with the present or the present with the future. For example, take a photo of yourself standing by the Split Button sculpture outside Van Pelt Library, and someone else will be able to come along and see you standing there long after you’re gone.

3D Apartments allows potential customers view actual apartment listings in 3D or VR, find roommates, place virtual furniture in the apartment to see what it will look like, and eventually be able to purchase that furniture and have it delivered to their new apartment. Also: OMG apartments are expensive in New York!

As much as learning about and trying these new technologies was fascinating, what made the overall experience invaluable was being able to talk with their creators and other company representatives. The cost of a train ride plus a very reasonable registration fee (with special pricing for students and educators) were easily worth it. I’d recommend the Expo to anyone interested in learning more about what’s happening and VR and AR. I certainly hope it returns next year.

View all posts by David Toccafondi